In October 2015 we performed one of highlights of English theatre, Oscar Wilde’s The Importance of Being Earnest.  This utterly timeless play owes its undimmed and enduring appeal to Wilde’s perfect combination of comic timing, beautifully written dialogue and some of the most memorable characters anywhere on a stage. It is no surprise that Earnest has remained such a favourite on both the amateur and professional stage ever since it was first performed in 1895.

As usual we added some wonderful music to the evening and what could be better than to match the words of Wilde with the equally light and airy but beautifully crafted music of Cole Porter and his contemporaries, including popular favourites such as Night and Day, It’s De’lovely and Anything Goes, as well as other less well-known gems, such as Miss Otis regrets and The Tale of the Oyster.

Of course, we were blessed with another super cast, including the not-to-be-missed Joan Self as Lady Bracknell, following on from her hilarious performance as Mrs Malaprop in Sheridan’s The Rivals, surely one of Wilde’s main inspirations for one of the most quoted characters in English literature. 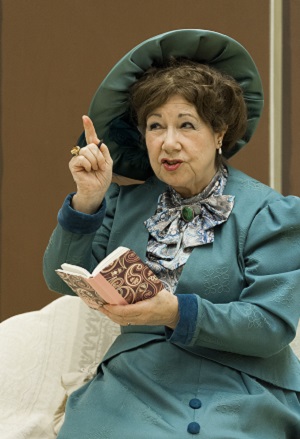